The Art of Work
by the folks of

You won’t get far without the right team around you, according to Borre Akkersdijk 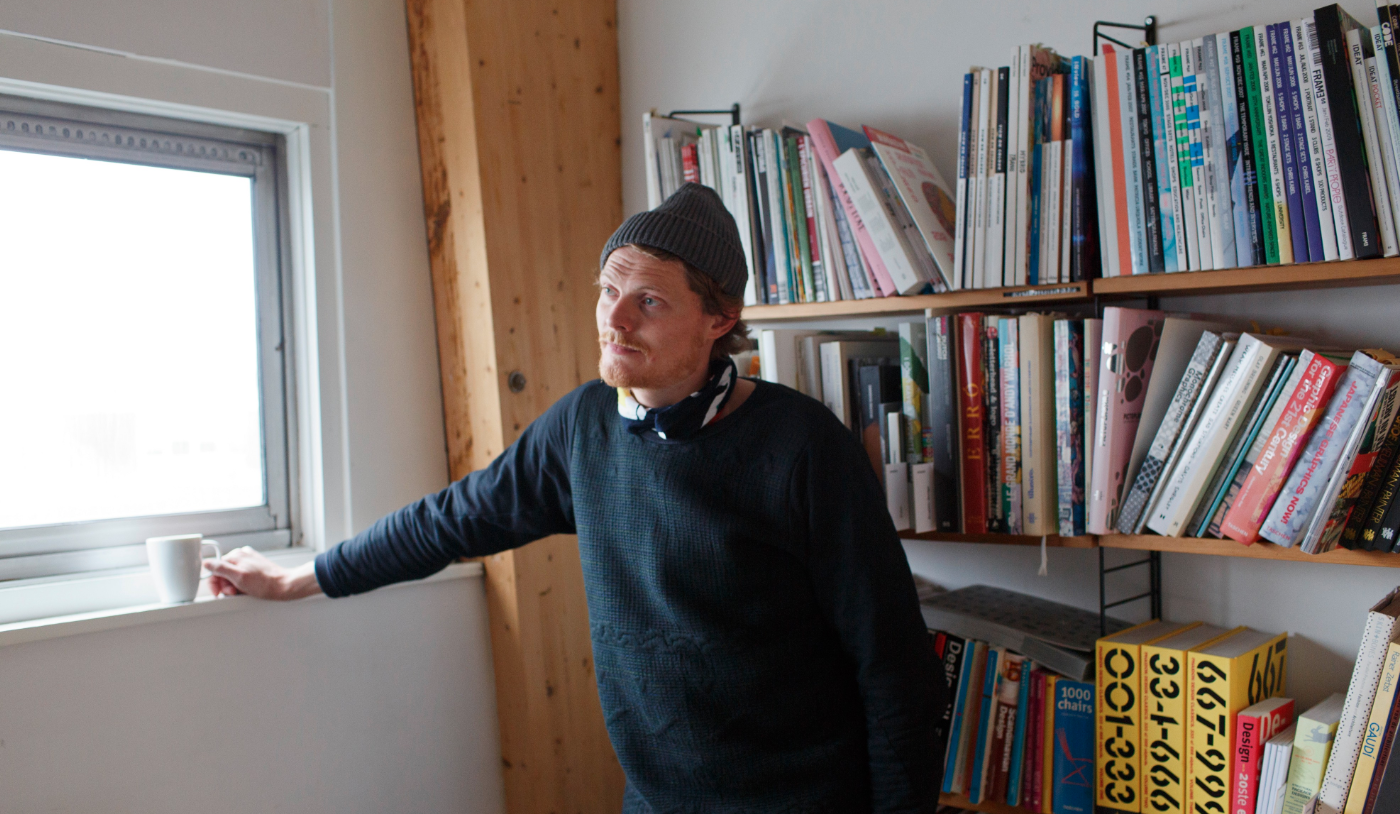 Out with the old

‍I’ve been fortunate enough to be a regular visitor to Borre’s studio over the last six months. However, this is our last meeting in his West Amsterdam workshop. Not for any sinister reason, simply because Byborre, the company he founded, is about to move to a significantly larger location a short cycle ride away. The ‘old’ space is noticeably fuller this time, bulging at the seams with rolls of fabric, mannequins and samples. Sketches I saw on previous visits have turned into tops, bottoms and scarves from the first Byborre collection, soon to be presented for the first time at Paris Fashion Week, and there are noticeably more people sewing, cutting, talking and laughing around us. The one thing that hasn’t changed is Borre and his level of activity. 10 AM might be the start of my day, but he bounces into our interview on the back of two earlier meetings to discuss a forthcoming knitting workshop and Byborre’s plans for Paris. Even though the latter is one of the year’s biggest events, he’s refusing to play by its rules.

“The buyers from the big fashion houses only go to a few places,” says Borre, “Never to the other side of Paris where we can afford a space. So we decided to come to them: we’re going to drive a truck around Paris with our name all over it and a showroom inside. It’s going to be trackable on Google Maps so you can see exactly where we are. Fuck the way it’s traditionally done.”

‍Indeed. Challenging the status quo has pretty much been Borre’s modus operandi since day one. He first rose to attention in the fashion world with quilted knits that were developed by retweaking the programs in a mattress making machine. He took these knits a quantum leap further in two concept suits that illustrated the potential of wearable technology: BB.Suit 01 was a mobile Wifi hub, BB.Suit 02 cleans up air pollution around the wearer. The resulting storm of publicity brought the technology and fashion worlds to his door, as well as giant brands including Nike, Red Bull and The North Face. New facilities, staff and investment mean that Byborre is now in a position to make serious moves.

A potent symbol of the new possibilities open to the company is the fact that Borre is now the proud owner of a circular knitting machine. As he says with a rare hint of pride, “they aren’t given to just anyone”. These monsters stand over two metres tall, topped by three halos of spools of wool. When they get going (and this one will be running 24/7), it’s a sight to behold as the yarns spin and whir into the centre, before Byborre’s signature textured knits eventually emerge from the other side. The machine is accompanied by another new arrival: resident knitting expert Annemarie Reedijk, who previously set up an innovation lab at American Apparel.

“If I just focus on the label, Byborre becomes just one name among a billion. People are interested in me because I work in different disciplines.”

‍However, as Borre reluctantly admits, having the right people and equipment onsite doesn’t mean that your wildest dreams (and you can take it for granted that his are pretty wild) are suddenly magically possible. As a result, he has had to assess what his role will be in a company that is increasing in demand and size.

“Because I’m really all over the place it was important for us to consider how to steer the company in a clear direction. I’m super curious: I see something, get hyper enthusiastic and want to do it immediately. But the very next moment I’ll see something else and want to do that too. It’s a mess for everyone.”

In the nicest possible way, I can believe it. Our conversations invariably touch a dizzying array of subjects, from music to the end of mass consumption, and although he’s a delight to talk to, I always leave in a slight daze. I imagine his brain works a bit like the circular knitting machine: lots of ideas spinning round and round at breakneck speed, before something new and exciting pops out.

Curiosity has been key to Borre’s success, but it’s a luxury he can’t always afford in a larger company. “When I was on my own, I could jump from left to right because I knew what I was doing. But if you’ve got ten people jumping around without knowing where we want to be at the end of the month, then we all end up in different places.”

“I started out alone, without a lot of money, so I had to ask a lot of friends for help. They were the ones who were good at something and I wasn’t. That mindset hasn’t changed.”

To make sure everyone is pulling in the same direction, Byborre will focus increasingly on two activities: textile innovation and clothing collections. However Borre is adamant that won’t be all they do, as he sees research and a cross-disciplinary approach as integral pillars of the company.

“If I just focus on the label, Byborre becomes just one name among a billion. People are interested in me because I work in different disciplines. When I work with CWI (the Dutch national research institute for mathematics and computer science) they know I’m not a technology expert, but they respect the way I combine it with textiles from the world where I am an expert. It’s the same in fashion: we’ve got some of the top innovators in the game coming over for a knitting workshop. They’re curious to see what we do, but if I stopped diversifying, they wouldn’t be.”

“I know pretty well what I can do, but I’m even more aware of what I can’t.”

Instead of narrowing his sphere of operations, Borre has hired more seniors to bring some order to the chaos, including Daan Spangenberg, the new Head of Design, with whom Borre has worked for over a decade. Borre describes this appointment as “perhaps my proudest moment of the year”, but it wasn’t a decision he made for sentimental reasons.

“I’m a dreamer, I see opportunities everywhere. Daan is more realistic. If I get excited by something I see as an opportunity, he’ll ask if I’ve really thought it through (the answer is normally ‘no’) and what it could deliver. If I’m still enthusiastic, then he makes me put it down on paper and tell everyone in the team what they have to do to make it happen.”

One of the most interesting, and sympathetic, things about Borre is how honest he is about his limitations. It would be easy for someone in his position to let their ego run unchecked, but a common theme in our conversations is the importance of delegation.

“I know pretty well what I can do, but I’m even more aware of what I can’t. For example, despite studying fashion design, I’m not the best pattern maker, but I have a clear idea of what I want a pattern to be. So I’ll hire a good pattern designer, and tell them where the space needs to be and how it should be shaped. How we get there in the end is always a dialogue. That’s why I think we can work on so many disciplines, because my strong side is assembling the right people, having these dialogues with them and pushing them towards a next step that they might not have thought of themselves.”

The right people for Byborre are dedicated team players. “I’m in this because I love what I do, not to make money or have a huge business. Same for everyone else here. Sharing that passion for what we do is at least as important as having the right skills or a good CV. If somebody comes in with a huge ego, bragging about how they can easily do the things I need, I don’t want that person in that team. That’s why Annemarie and Daan are here, because I fully trust them and can say you’re way better than me at this, please take the lead.”

Borre’s desire to develop means that his team isn’t confined to Amsterdam. The company is divided in three: as well as the textile lab and fashion label, the third wing is collaborations with external companies, whether for individual projects or on a long-term basis. CWI has become an official partner, with dedicated researchers working on Byborre projects, and Santoni, the Italian makers of the circular knitting machine, regularly sends technicians over regularly to share advice.

“We finally have a clear idea of what the core of the company is and what we’re strong at. That’s essential, because if the core doesn’t run smoothly and bring in enough revenue, you can’t do other things.

“I want collaborations that will make both sides stronger. We specialise in aesthetics, technology and textiles, and if a brand or collaborative partner is something stronger in another area, then we’ll try and add it. We learn from the research involved in every project we do, and whatever we learn, we can push through to the label, for example, or other jobs. What we’re building here is one big learning facility.”

This spirit of mutual exchange dates back to his first days as a designer. “I started out alone, without a lot of money, so I had to ask a lot of friends for help. They were the ones who were good at something and I wasn’t. That mindset hasn’t changed. It’s never ‘Hey, I’m paying, so you better do what I want say’. I realised that the gratitude I have for the people working with me was the reason that they kept on helping me — as well as the fact that they believe in what I do — and that’s enabled us to build something together. Day by day we prove that the best companies in the world are interested in what we’re up to, so let’s keep on being positive, keep on dreaming and see how far we can go.”

With a firmer structure in place, Borre is convinced he and his team can now go even further. “We finally have a clear idea of what the core of the company is and what we’re strong at. That’s essential, because if the core doesn’t run smoothly and bring in enough revenue, you can’t do other things. With that secure, we’re increasingly able to channel wild ideas, and give freedom, instead of just taking it and not making any progress.”

Subscribe to our popular bi-weekly newsletter packed with must read articles on hiring and workplace culture.

Thanks for subscribing!
Oops. That doesn't seem right?

Hire better from start to finish

Homerun enables companies like WeTransfer, Buffer and Bugaboo to attract better candidates through modern, rich job posts and streamline their hiring process with a feature packed Applicant Tracking System. Give it a try.