The Art of Work
by the folks of

JWT Amsterdam: Eyes on the Prize 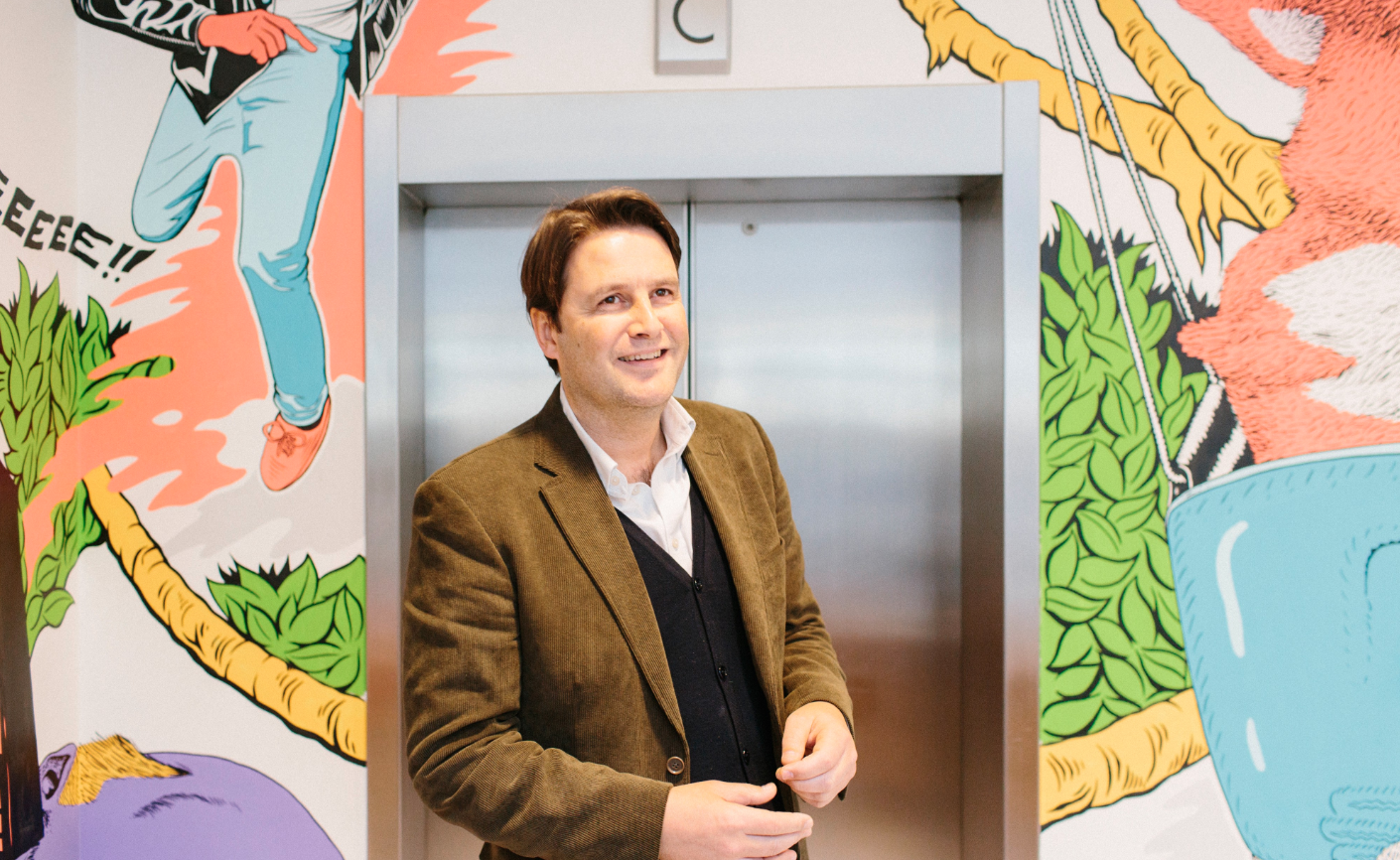 It was a very good year‍

It’s fair to say that in the advertising world, 2016 was the year of JWT Amsterdam. The Next Rembrandt, a campaign that used data to analyse the artist’s style and create a ‘new’ painting, paved the way for JWT to be crowned Innovation Agency of the Year at Cannes, and Dutch Agency of the Year by their national peers. These awards, and many others, mark a complete turnaround for the slightly down in the dumps agency Bas Korsten joined as Creative Director in 2011. Today JWT is located in the heart of Amsterdam, on the third floor of a monumental building on the Leidseplein, instead of an identikit office block n the edge of town, and the world’s creative talent is fighting to get a foot in the door.

“When I was trying to get teams four years ago, I had to promise a lot of incentives because we weren’t in a good place,” Bas reminisces. “Now people throw themselves at you — even offering to work for free — because they feel that there’s an opportunity to do great work within the agency. Ultimately as a creative, that’s what you want: to make a name for yourself and do good work, so you look for the environment where that happens most.”

“Of course, you look for original, clever ideas too, but character is even more important. It sounds stupid, but asking someone what hobbies they have reveals a lot about where their passion is and if it’s translatable to what we do.”

‍He should know. Even by most standards, Korsten’s route to the top was rapid. He made his breakthrough at DDB Amsterdam, where he became a creative director and “won everything there was to win”, before leaving to set up two successful independent agencies and create the sport of Footgolf (golf played with a football) on the way.

On his return to big agency life with JWT he turned the place inside out, introducing a new streamlined structure that resulted in the array of awards proudly on display in the lobby. However, Korsten isn’t one to rest on his laurels and the agency has recently shaken things up once more by dispensing with mid-level creative teams.

“The question as a creative is do you always want to be a striker, or can you also live with a role that lets others score while you do more dirty work?”

“People often get stuck at this level,” Korsten laments. “They get too comfortable and start talking about mortgages and wanting to guide younger creatives. That’s when you know that they’re on the wrong track and focusing on the wrong things.”

To prevent creative block, everyone at JWT is now either a junior or senior, and every junior is hired with the intention of becoming a senior in a short period of time. It’s a career path that mirrors Korsten’s own, which is perhaps why one of the things he looks for in a junior is the ambition to be better than him.

“Of course, you look for original, clever ideas too, but character is even more important. It sounds stupid, but asking someone what hobbies they have reveals a lot about where their passion is and if it’s translatable to what we do. One girl here makes sandwich monsters, for example, which shows that she keeps on being creative when she goes home, instead of watching TV. If you have this kind of passion for expressing yourself creatively at home, you will have it for work too.”

“I believe in not being here for too long. There’s always a better place to be if you don’t get the most out of yourself here.”

The right environment for creativity

‍Once the young talent has been identified, the trickier task of managing it kicks in. Given that it’s a delicate balance between satisfying individual and collective ambition, it’s perhaps appropriate that we turn to football for a metaphor to explain how to create a winning team.

“The question as a creative is do you always want to be a striker, or can you also live with a role that lets others score while you do more dirty work? As a striker, occasionally you’ll have to do some defending too, but you’re here to score goals. If you don’t, that’s fine, we’ve all had a dry patch — but at some point you’ve got to score again. Some people are here to be defenders, who I don’t expect to score, and I don’t want them to try to either. It may sound harsh and demotivating, but it’s the role I see for them at the agency. It doesn’t make any of those people a less important part of the agency, it’s just a different role.”

Another parallel between the worlds of advertising and football is a regular turnover of staff, something Korsten encourages. “I believe in not being here for too long. There’s always a better place to be if you don’t get the most out of yourself here. I’m very open to people about that — if you’re not at the right place at JWT, I’ll say ‘Go away,’ and I’ll mean it in the nicest possible way. ‘Leave, let people experience you in a different way’. I’ll help them find somewhere new, it’s simply sub-optimal for everyone otherwise.”

“Ambition is deeply rooted in the agency, and I always assume that people understand what that is and what it means in a day-to-day job, but I think I could be better at being the coach of the team and making everyone feel valued.”

Does this mean he’s ever given someone a second chance? Once. “It was a team that came up with great, weird, ideas twice a year, but were complicated to work with the rest of the time. I reluctantly let them go, and told them they had to learn the trade first before doing the extra things. Afterwards, I thought, ‘Fuck, they do produce two incredible projects a year’, so I brought them back a week later. They stayed for another year, but it didn’t work out. I was right the first time.”

Experiences like this have led him to question whether more could be done to improve his management style. “The way we do things is successful, but it could it be more successful if we got everybody on board. I alternate between thinking this is the character of the agency, either you like it or you don’t, and wondering if I could have done more to make it a place where everybody feels part of the success. I’m quite digital in the way I communicate, which has its pros and cons, but I don’t take enough time to sit down with people and ask how they think they could develop better. I don’t have enough time for it either, so perhaps we should go to a structure where I can invest more hours in that. I’m contemplating this move at the moment, but I’m still struggling with the idea of whether it’s who I am or not.”

While this sounds like an on-going internal debate, I ask if Bas already has a plan in place to create the right environment in JWT for creativity to flourish. “To be very honest, that’s something I haven’t cracked yet. Ambition is deeply rooted in the agency, and I always assume that people understand what that is and what it means in a day-to-day job, but I think I could be better at being the coach of the team and making everyone feel valued. The problem is that it doesn’t sit with being super-ambitious myself. I run with the flag and hope everyone sees what I’m doing and keeps up with me, but sometimes I look around and think, fuck, I’m all alone. I didn’t explain where we were going well enough.”

“Pushing your own boundaries, the boundaries of the business you’re in, of reality itself, that’s what 2017 is going to be all about.”

Back to the future

‍While Bas might be unsure about his individual role as a team manager, he’s certain that everything else within JWT is still on the right track. “I think this agency is a place that develops on its own initiative instead of waiting for the client to ask a question. That’s a success, which is also reflecting on our hiring policy. We do get a lot of great people in, but we don’t always have work for them, because we hope they will change the agency from within. Sometimes it works, sometimes it doesn’t, but as long as you keep making more good than bad decisions, then you’re moving forward — and that’s what we’ll be doing. Pushing your own boundaries, the boundaries of the business you’re in, of reality itself, that’s what 2017 is going to be all about.”

Having said that, one direction that Korsten is currently exploring might set
the agency back a few hundred years: time travel. Really? Time travel? “Why not?”, Korsten replies with a grin. “I’ve asked the creative technologist for BMW if they can give me some information on the latest research and development.”

As my jaw falls to the floor, he bursts on enthusiastically: “It’s not as crazy as it sounds. A car is about getting you from A to B in the most exciting way, and time travel or teleportation would be a great way to do that.” Well, it makes some kind of sense. After all, who would have thought that bringing Rembrandt back to life to create a new piece of art would have been possible?

We’d love you to join our community of designers, recruiters, founders and HR managers by subscribing to our bi-weekly newsletter.

Thanks for subscribing!
Oops. That doesn't seem right?

Hire better from start to finish

Homerun enables companies like Wetransfer, Ace & Tate and Bugaboo to attract better candidates through modern, rich job posts and streamline their hiring process with a feature packed Applicant Tracking System. Give it a try.